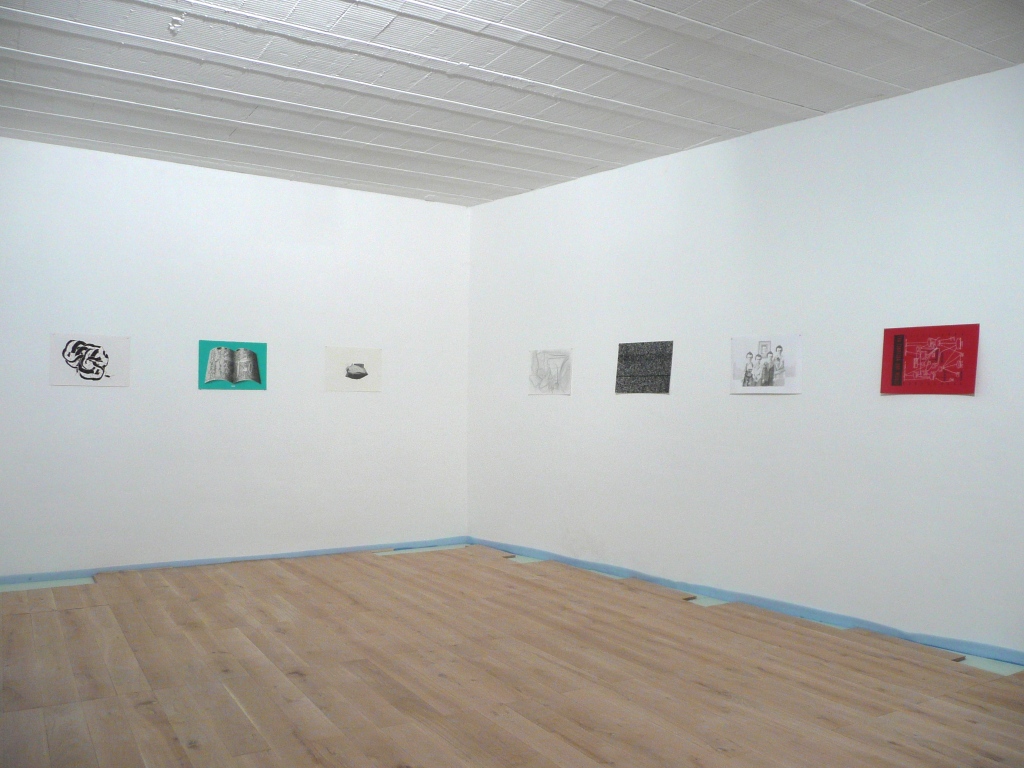 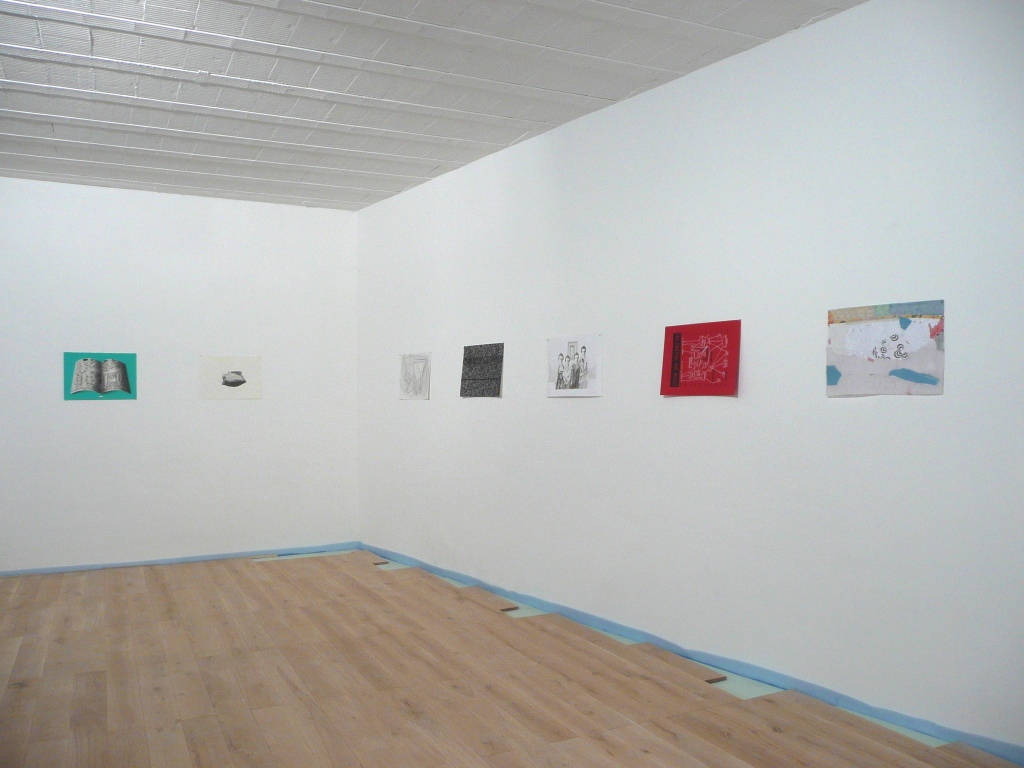 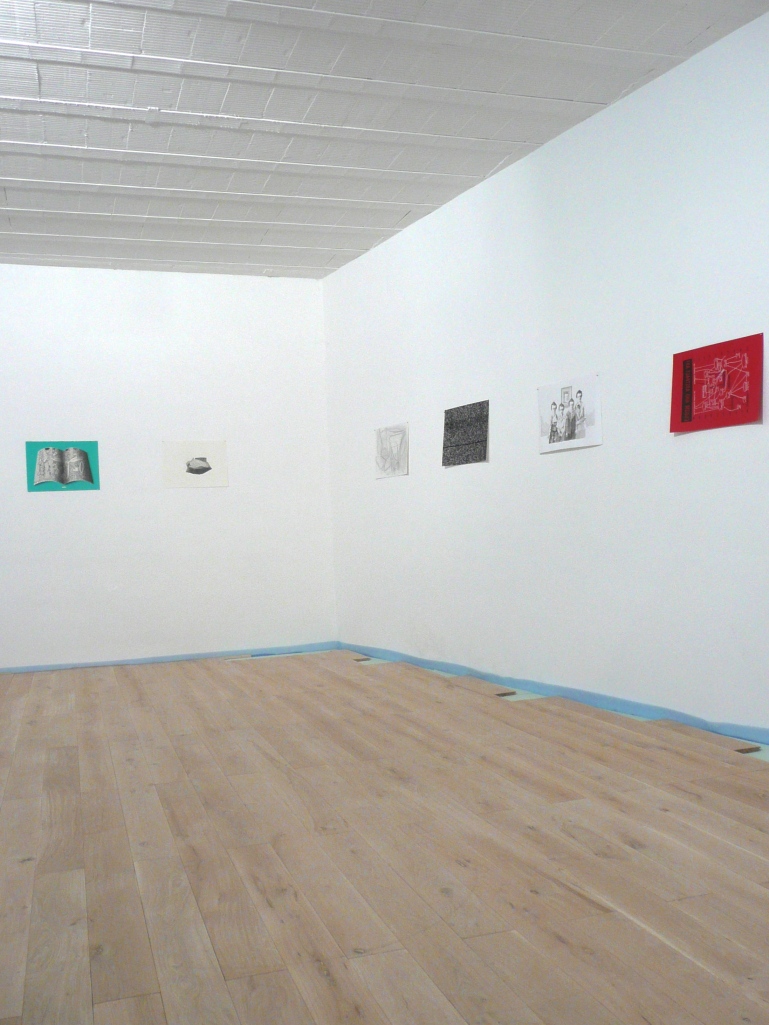 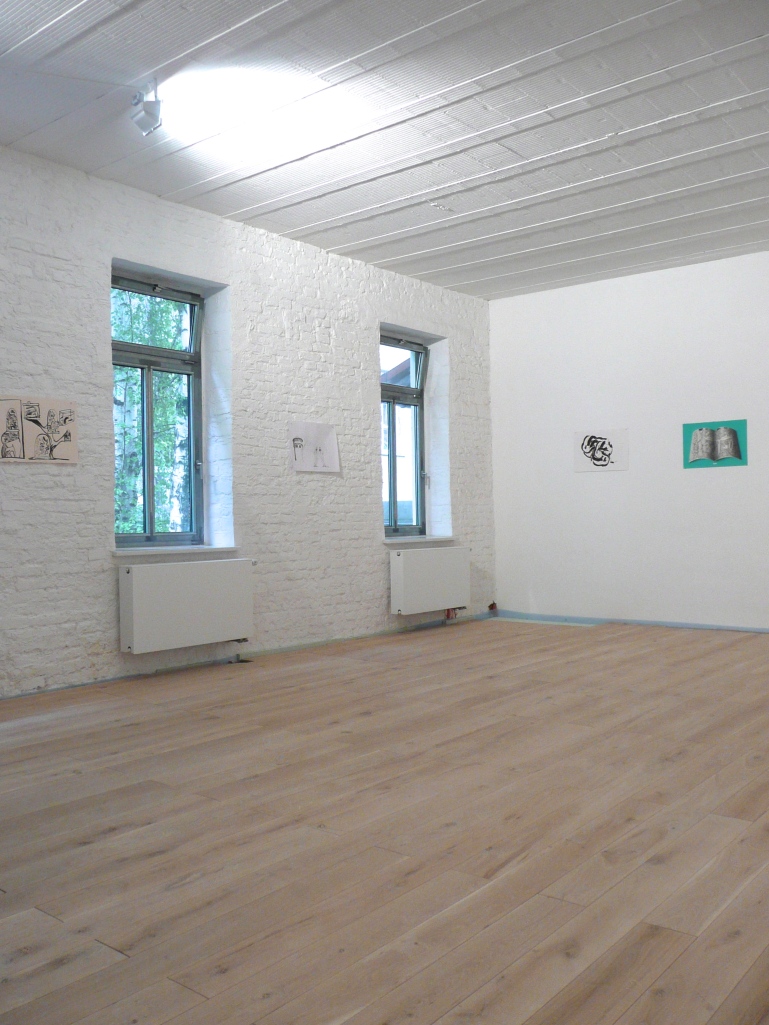 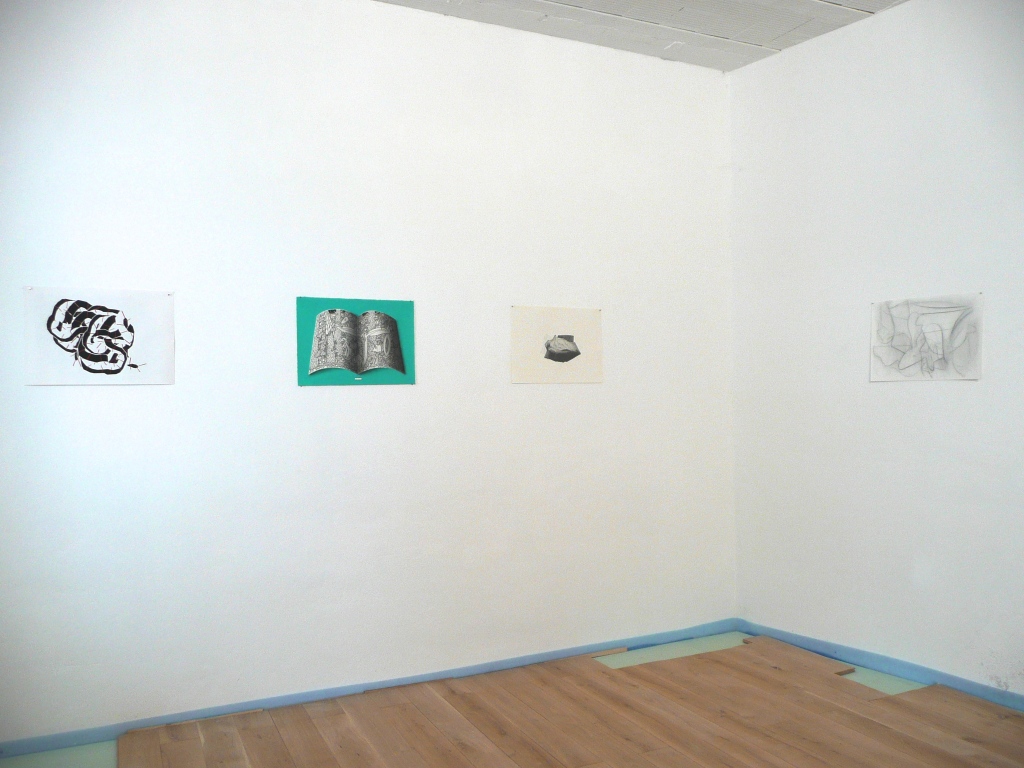 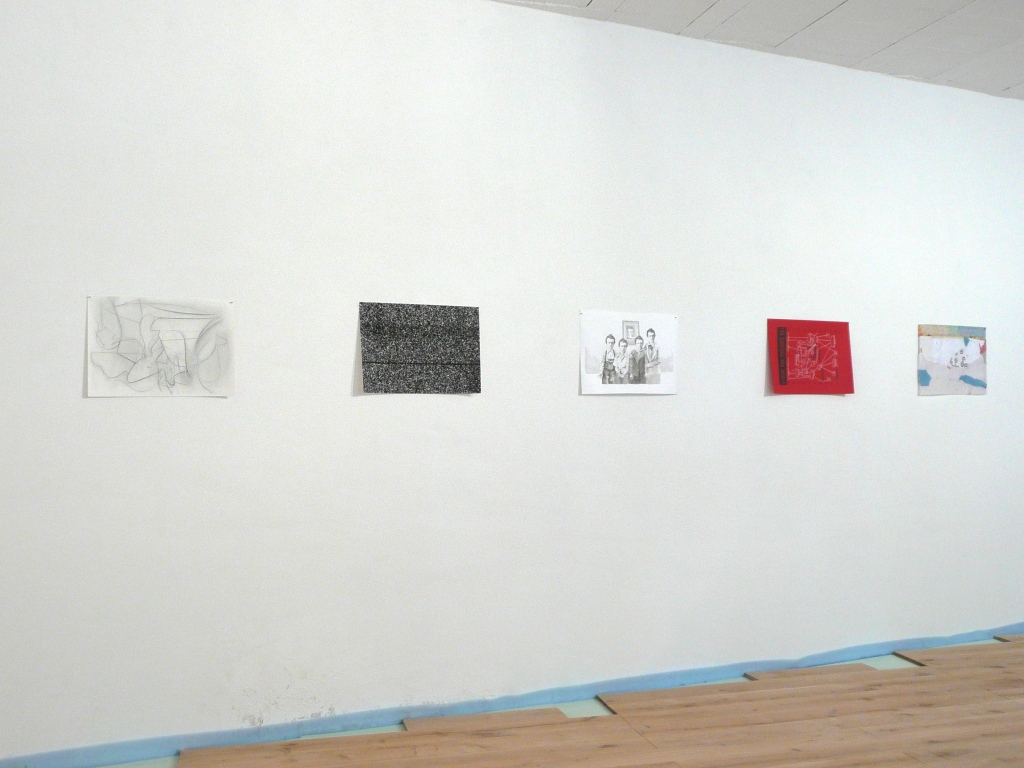 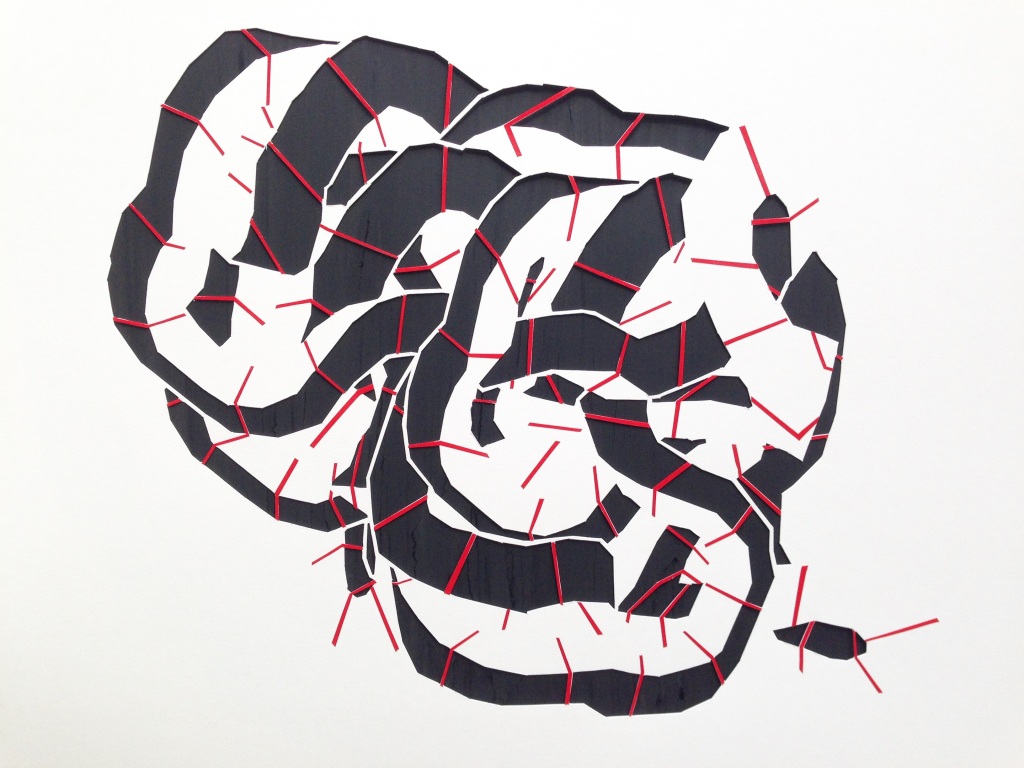 The process of drawing is fundamental to my practice as a sculptor. It can at times direct me rigidly so I can practically construct an object and at other moments be a fluid and abstract spatial origin.

I have been making these cut out drafts of objects for a while now, they help me develop complex structures and visualise a spatial hierarchy of a virtual object.

Perhaps the use of a scalpel to draw instead of a pencil or ink blurs the line between two dimensions and three with its resulting depth. However the information taken from the resulting pictorial image does not rely on the carved dimension only the line removed or added as vinyl.

The image primarily illustrates two things; one face of a three sided object and a coloured detail that rotates around these three faces.

The resulting image seems abstract yet is actually a diagram or map of a potential thing. 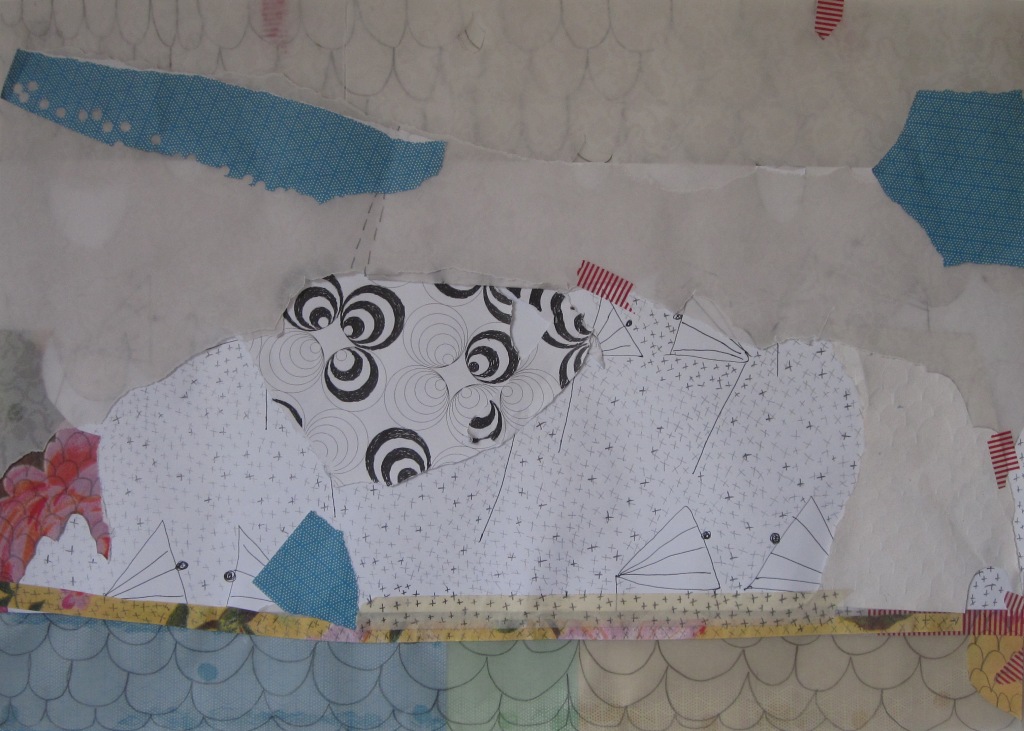 Diomira…a city with sixty silver domes…the multicoloured lamps are lighted all at once.

Cut or torn, carefully placed or hidden between layers of pattern; the various components merge to form a no-mans land where they can create and inhabit a space of their own.

The title of this piece is borrowed from ‘Invisible Cities’ by Italo Calvino.  Calvino’s imagined cities provide a quasi-narrative for this work that locates itself somewhere between the realms of drawing, painting and collage.

Night Sea (Study) relates to an ongoing series of paintings, ‘Notes on The Sea’. Consisting of twenty four minimal photorealist paintings (shown in sets of 12) the works depict calm, fog-veiled seascapes as polarities of night and day. In this piece the archetypal romantic image enters into a contradiction with itself as it becomes part of a system. Playing with notions of duration, mathematic abstraction, and the possibility of painting a beautiful landscape, the works are an attempt to rationalize the epitomised romantic landscape through a meditative practice which plays with various senses of rhythm. Rebecca Partridge 2014

http://www.aspacefordrawing.net/?p=370 – thanks for mentioning us!

Drawing is not something I think of as particularly relevant to my everyday practice as I usually make paintings with an airbrush; so when asked to participate in this show, I found myself unsure about what to produce.

I was attracted to the idea of drawing the white noise seen on a television screen, because it reflects this feeling of being stuck, of being a subject, which also ‘jams’ itself.
The image is abstract in one sense and photoreal in another – the lines are the result of my camera having a shutter speed fast enough to record the television’s cathode ray.
As I worked on the drawing other aspects occurred to me. White noise is approximately 1% residual energy from the Big Bang and I liked the idea of visually representing (albeit in a small way) of this primal energy.
A friend also mentioned that some people believe the dead use white noise to communicate with the living and I thought the idea of drawing as a kind of portal was also interesting. Maybe it contains a message from the afterlife!  Will Tuck 2014

The first of our series on drAwn 2gther ‘s participating artists: 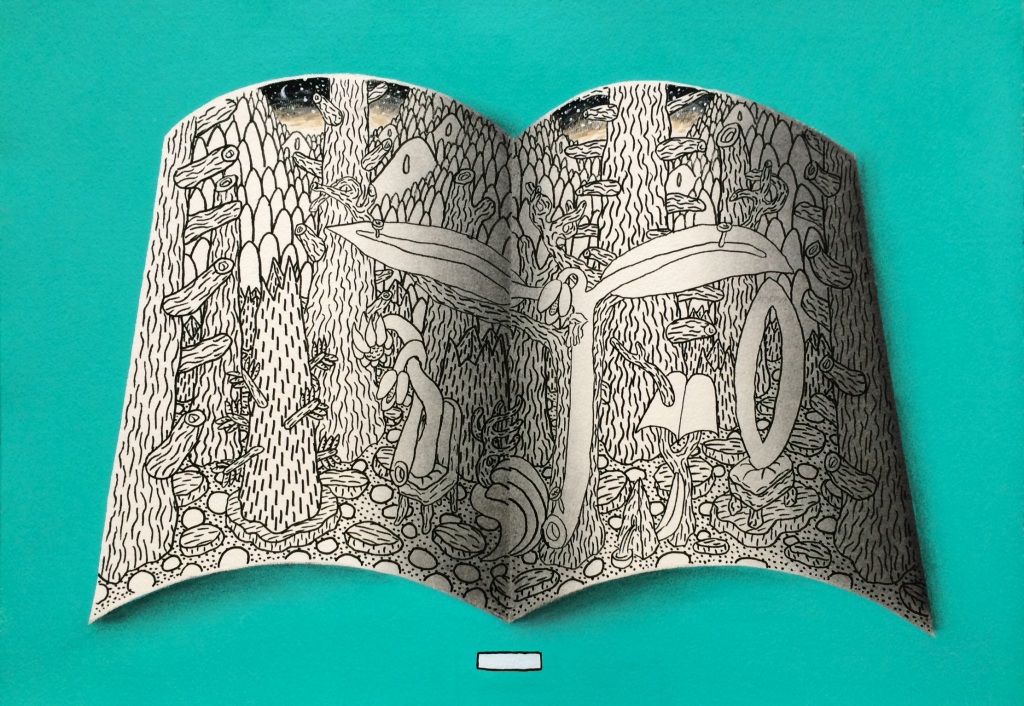 When a deadline opens up a space and a drawing needs to appear, there are questions to be asked: what should this A2 sheet of paper for an exhibition in Munich produce? I start drawing and remember how on my way to Munich I first passed Colmar and then the Black Forest. I reflect on a book about the Isenheim Altarpiece, which spoke to me at the time; the book told me who the piece had met and who it had influenced while it was in Munich. I started to draw and think. A book appeared, a forest and a transcribed version of the Isenheim Altarpiece followed. Once again I sublimated Grünewald’s far too painful altarpiece imagery into organic forms, bordered by the threshold of a forest that could be in Wales, The Vosges or The Black Forest. The space talks of a style stuttering journey. A journey from Wales to Colmar to Munich to Colmar and back to Munich. Robin Mason, 2014