Here is the link:

The USA show has ended, but will soon travel to London, to be part of Amerika: idea; fantasy; dream; myth; image, opening at the Camberwell Space on the 7th of January 2014!

Alasdair Duncan, who co-organised USA, makes signs that are stand-ins, emblems for things that are yet to be. He’s long been interested in America as an abstract ideal, a kind of promise of something vaguely but certainly better, which is not firmly coupled to the reality of the place of America. His poster  functions as an advertisment for the show by standing in for an idea, a placeholder of what the show might be. It superimposes a colour saturated sign –  the exact meaning of which is held at bay – over an old photograph of New York – a fetishistic image – turned on its side.                                           AD 2013 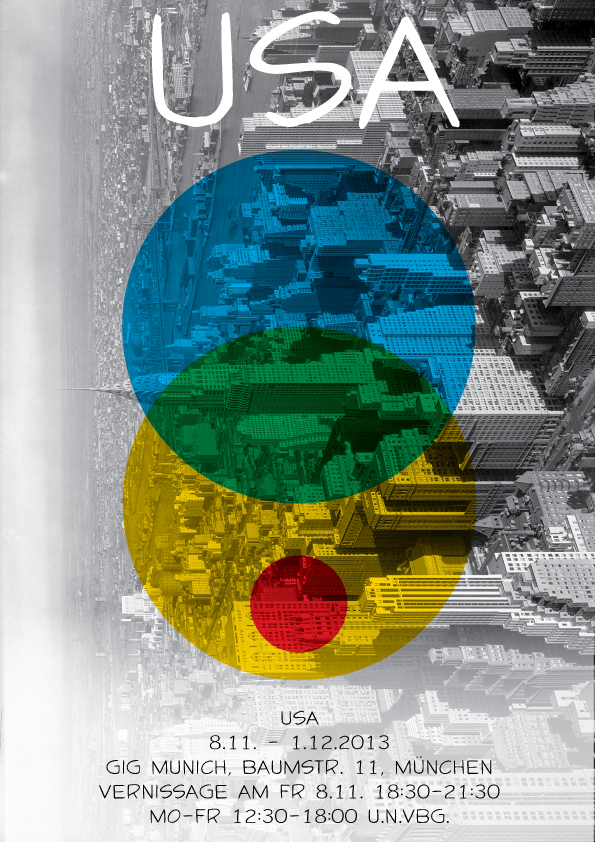 GiG Munich is planning a group show to coincide with the annual München Kunstwochenende taking place on the  8th, 9th and 10th of November. Save the date!

America has from its inception had a powerful mythic pull for the world beyond it. America, as well as being a place, is made of a heady, swirling abstraction of ideas, fantasies, dreams, myths, and images: forms of the imaginary which belong no less to the world than to Americans. Our America (we who are not Americans) invokes fierce partisan emotions, and draws us here and there in our relation to our own circumstances as well as the reality of the United States, better and worse. This America, the America of the rest of the world, has been, and continues to be, a material and drive for tremendous cultural production.

U-S-A, organized by GiG Munich, continues with the premise put forward by the curators of Amerika. The show aims to collect our European visions of America and reflect the mediated relation we have with the current realities of the United States.

GiG Munich invites artists, designers, architects, photographers and filmmakers to submit posters documenting their American visions. These 20 posters will be shown as part of Munich’s Art Weekend 2013 and then incorporated into the larger Amerika show.