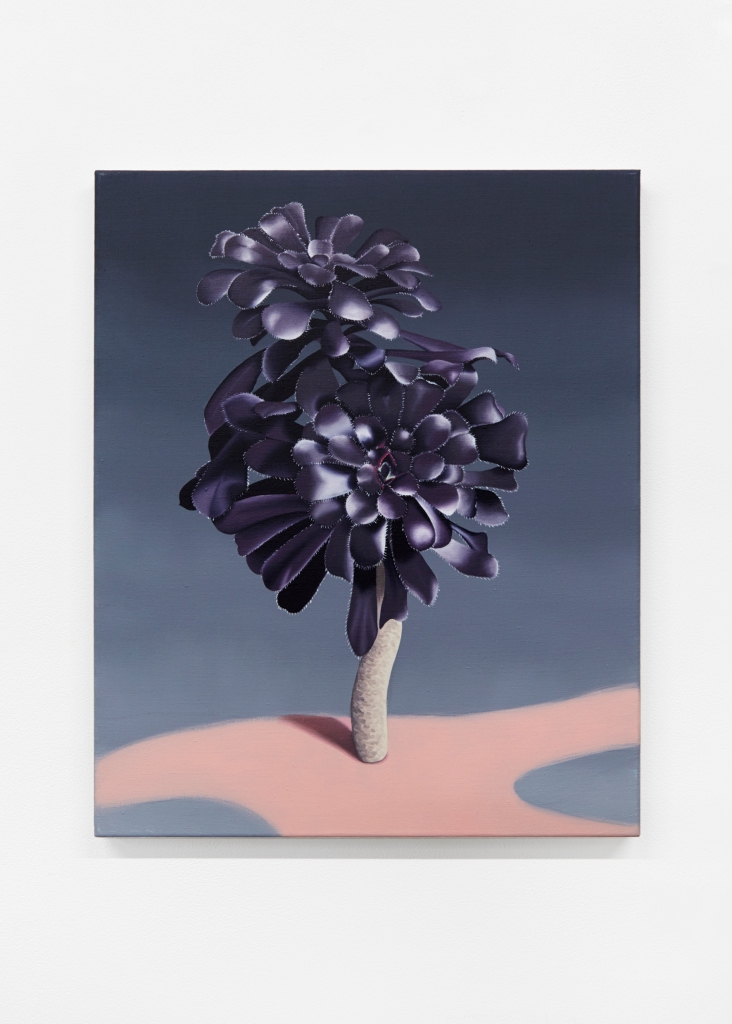 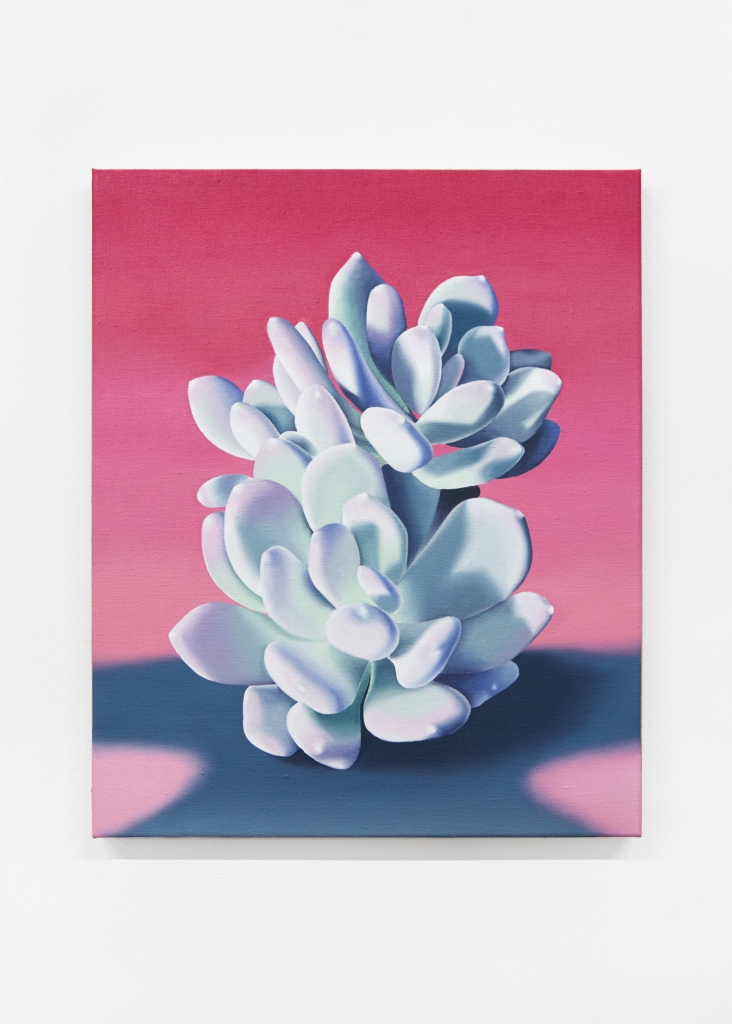 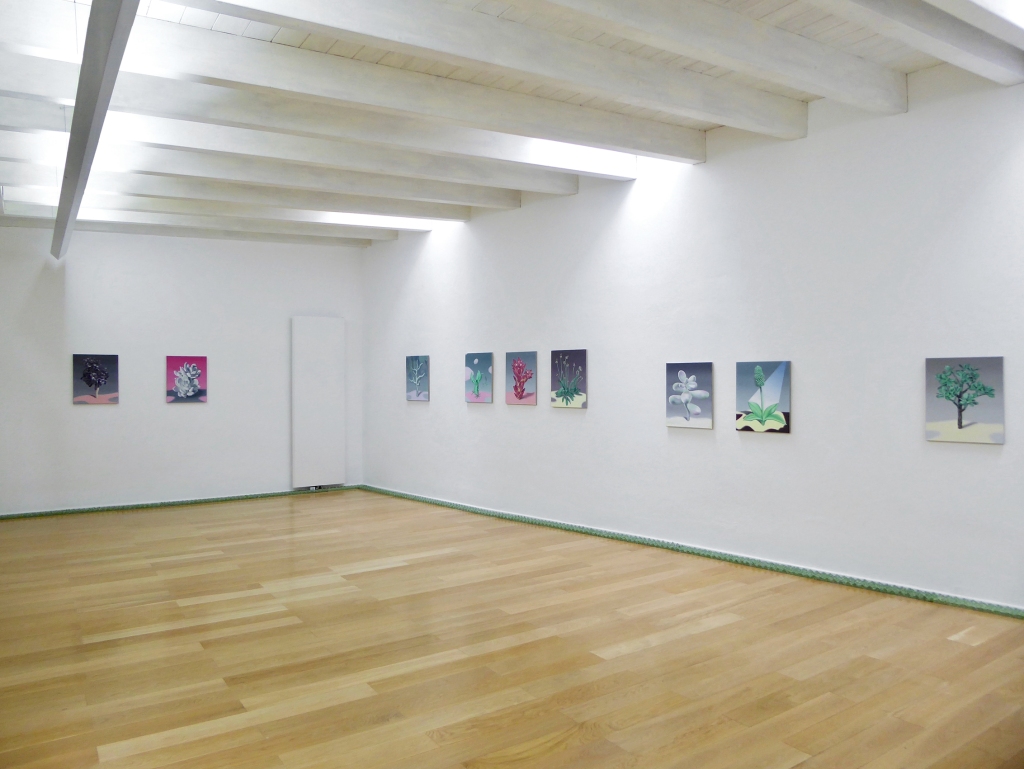 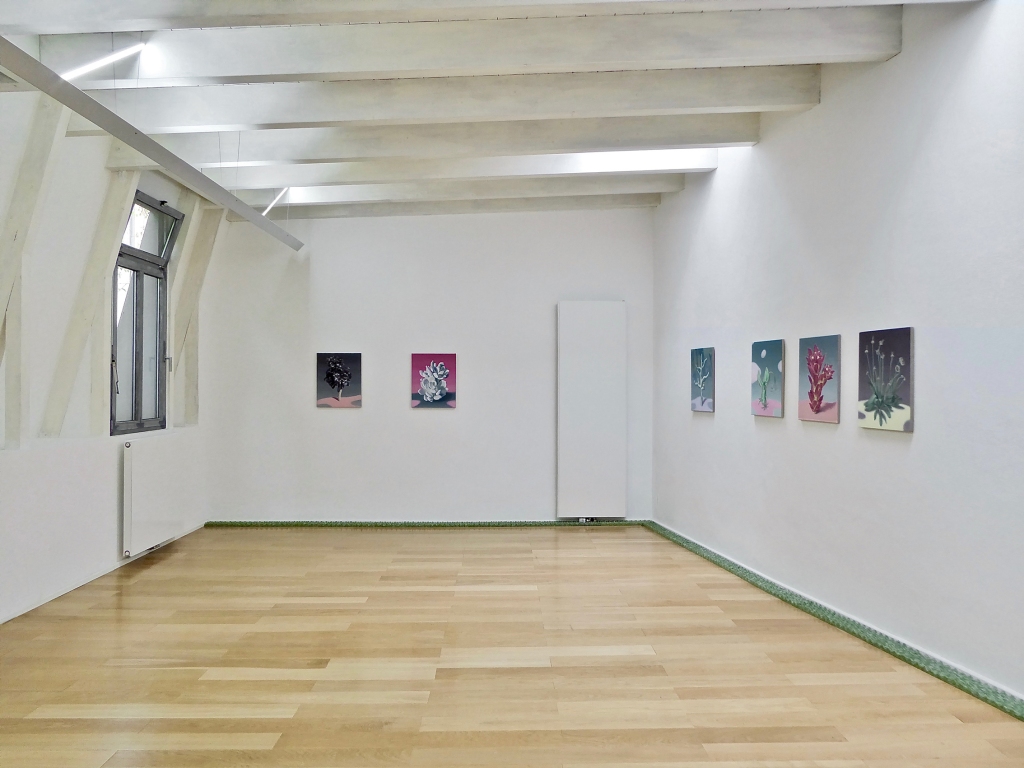 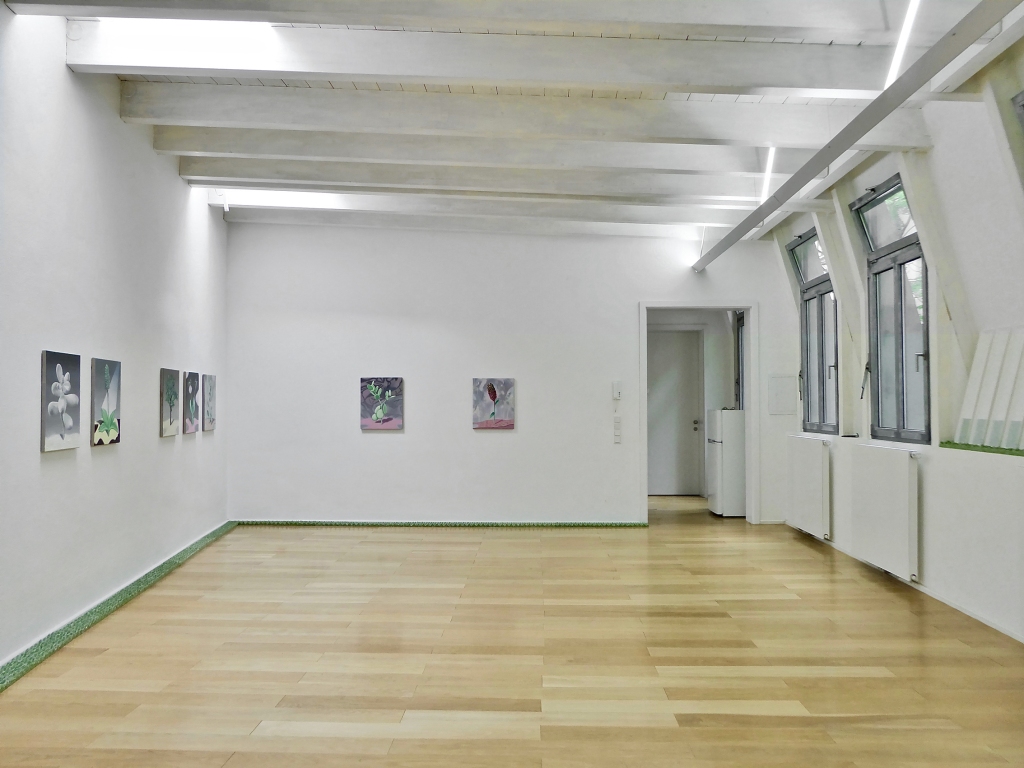 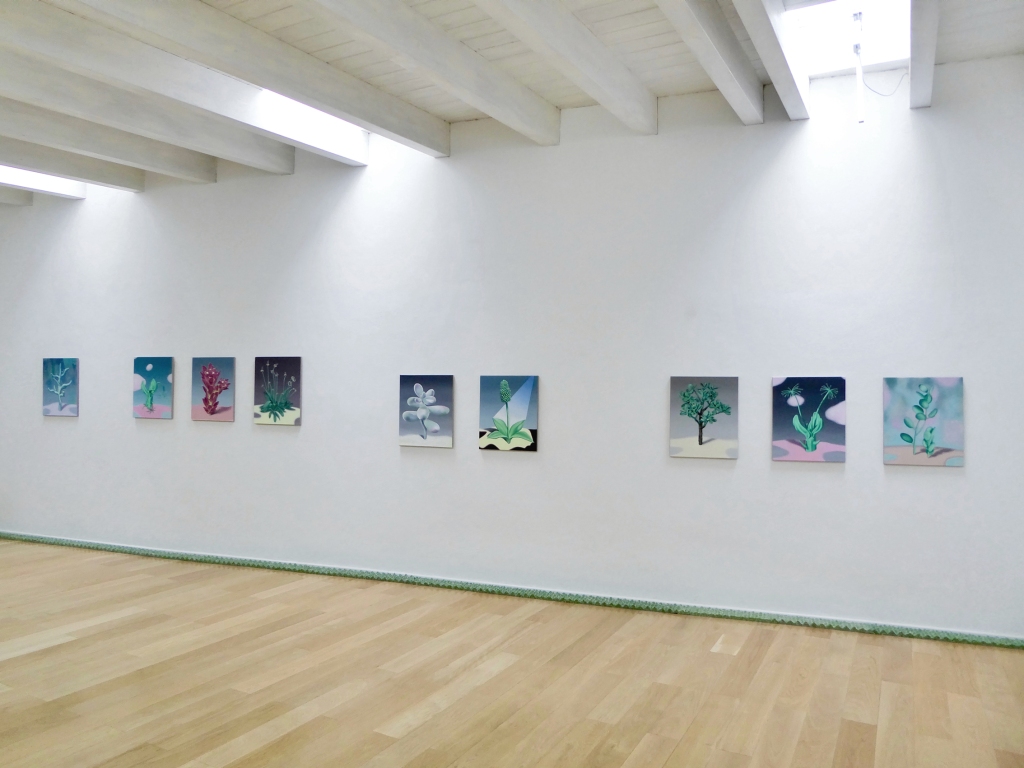 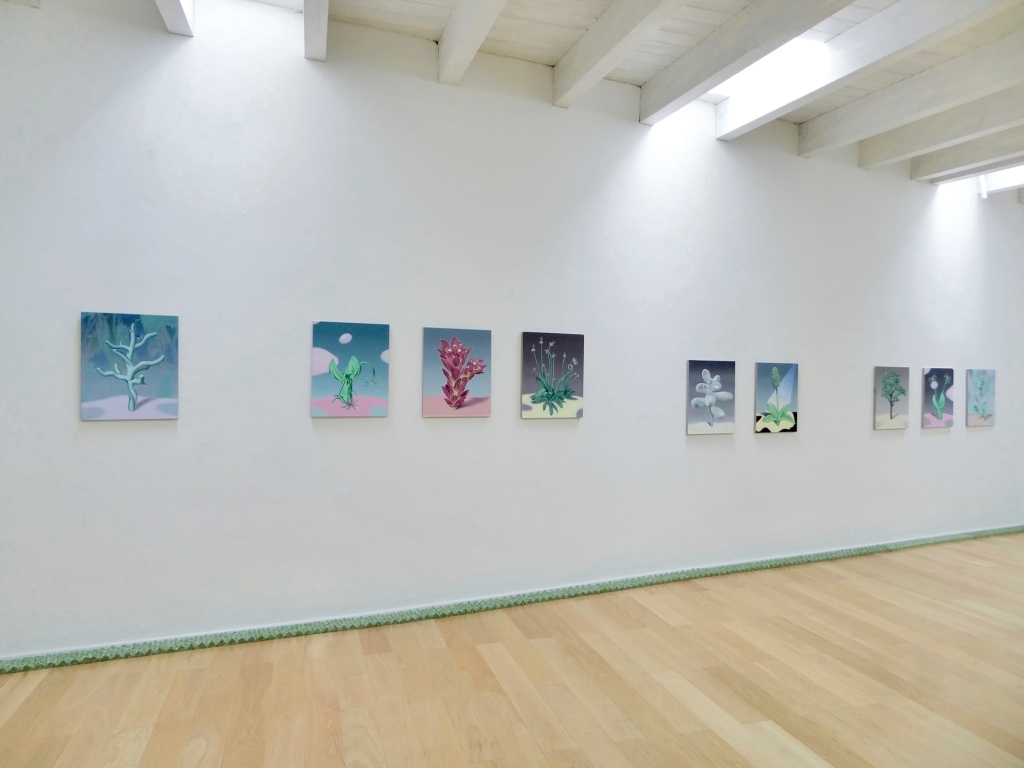 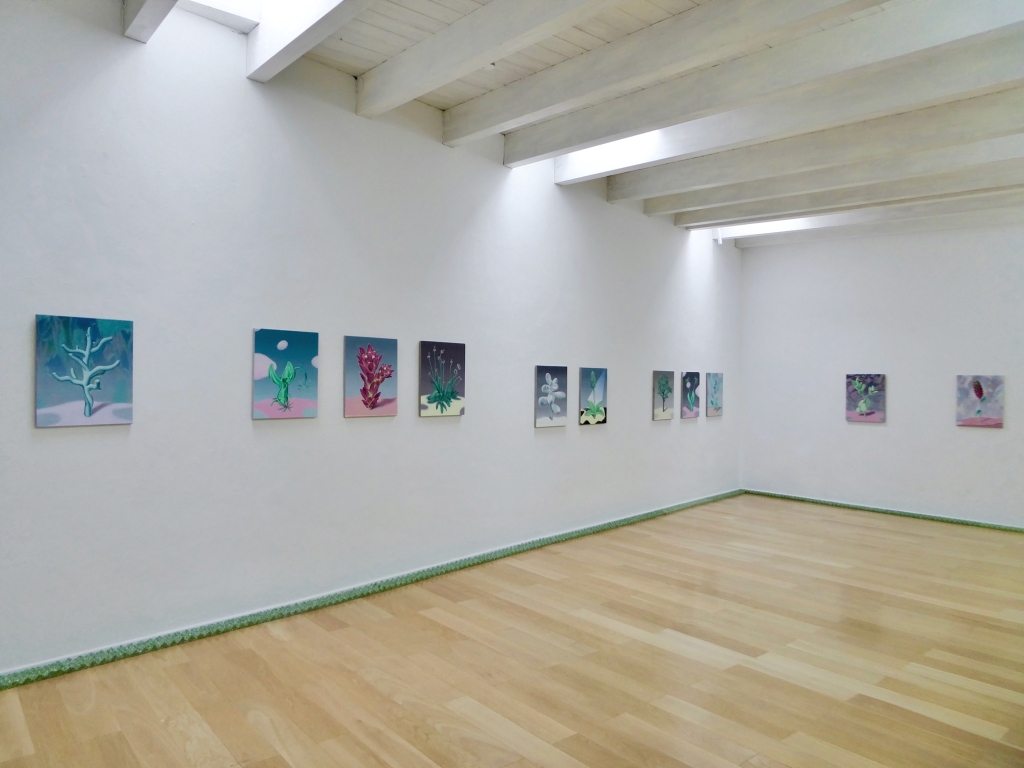 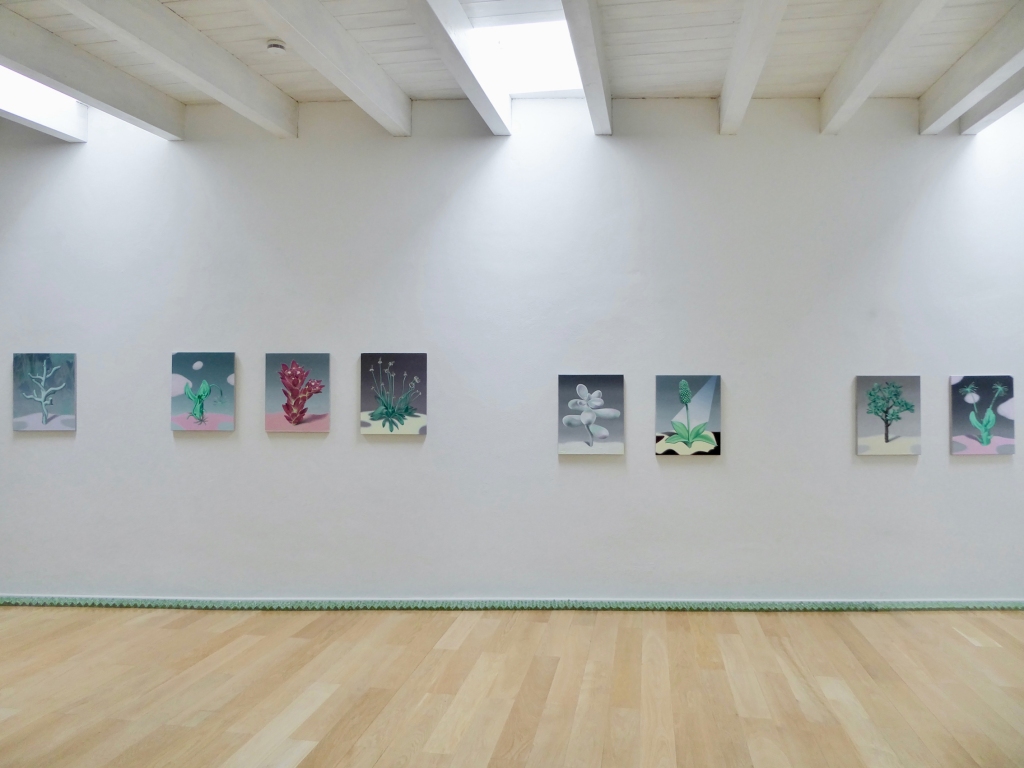 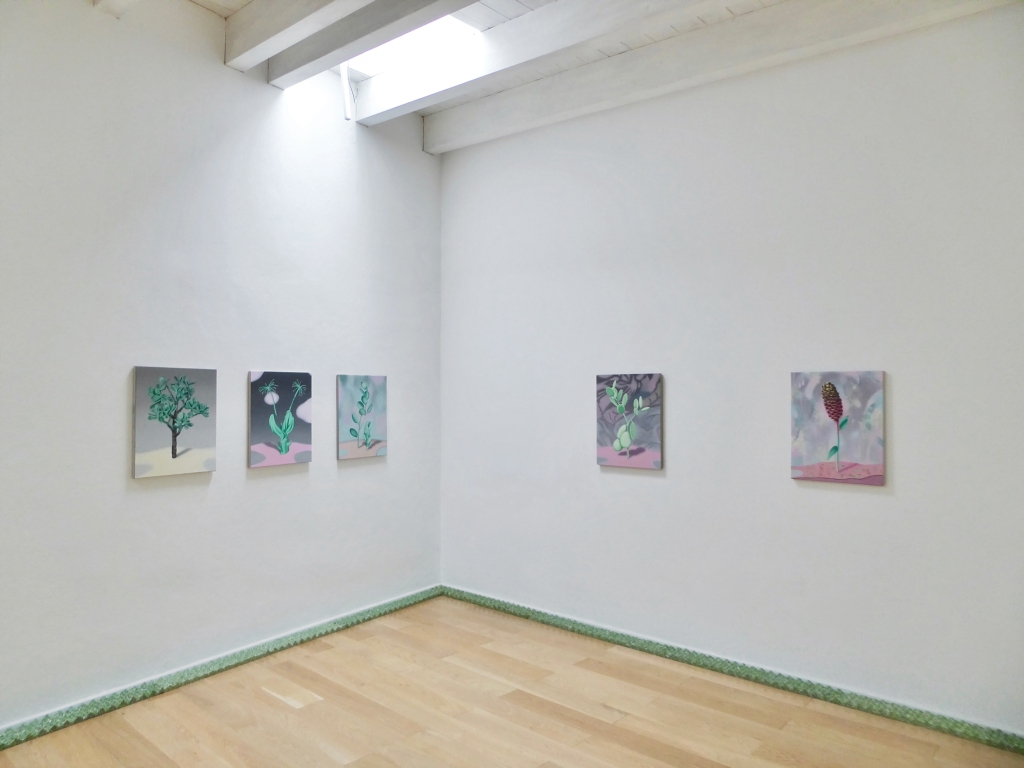 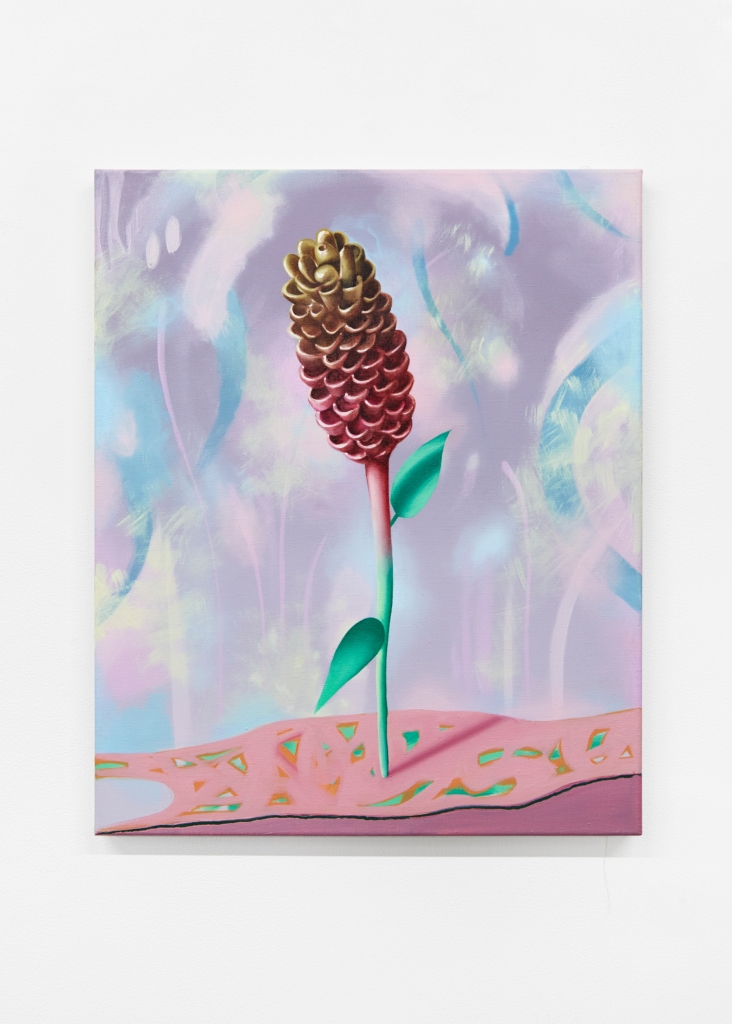 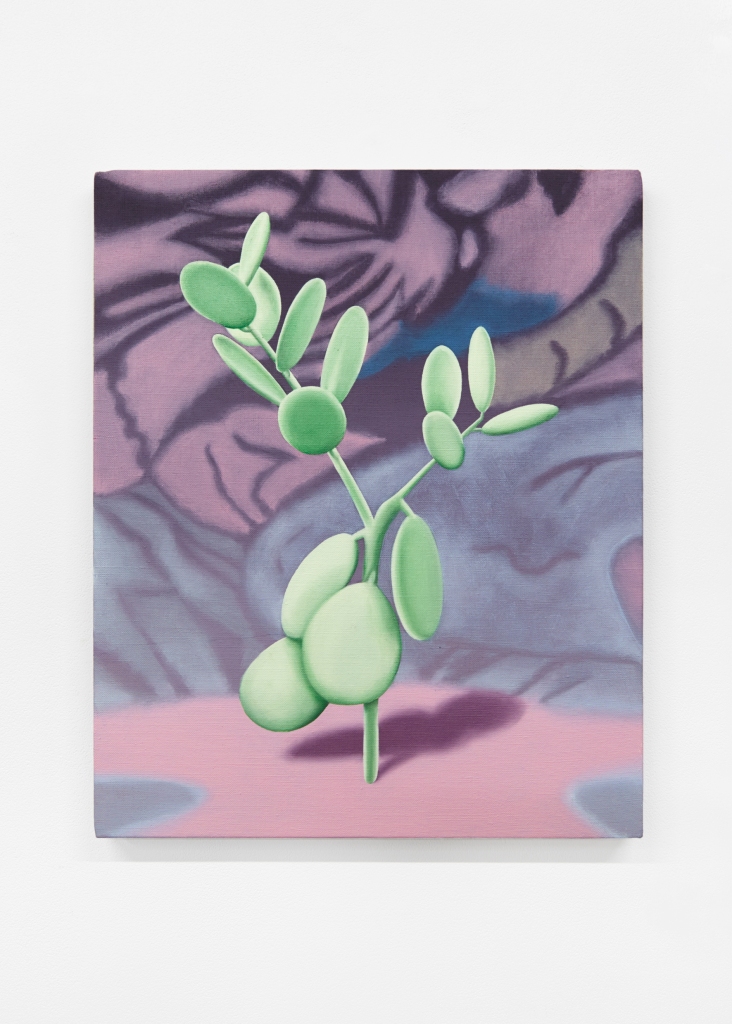 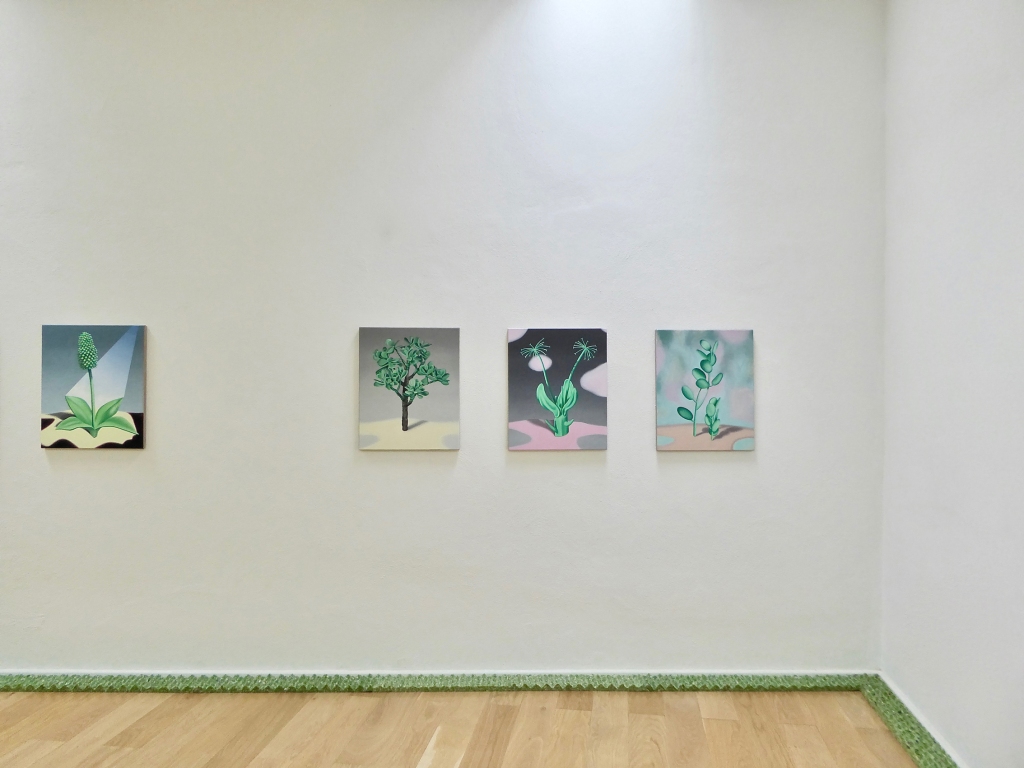 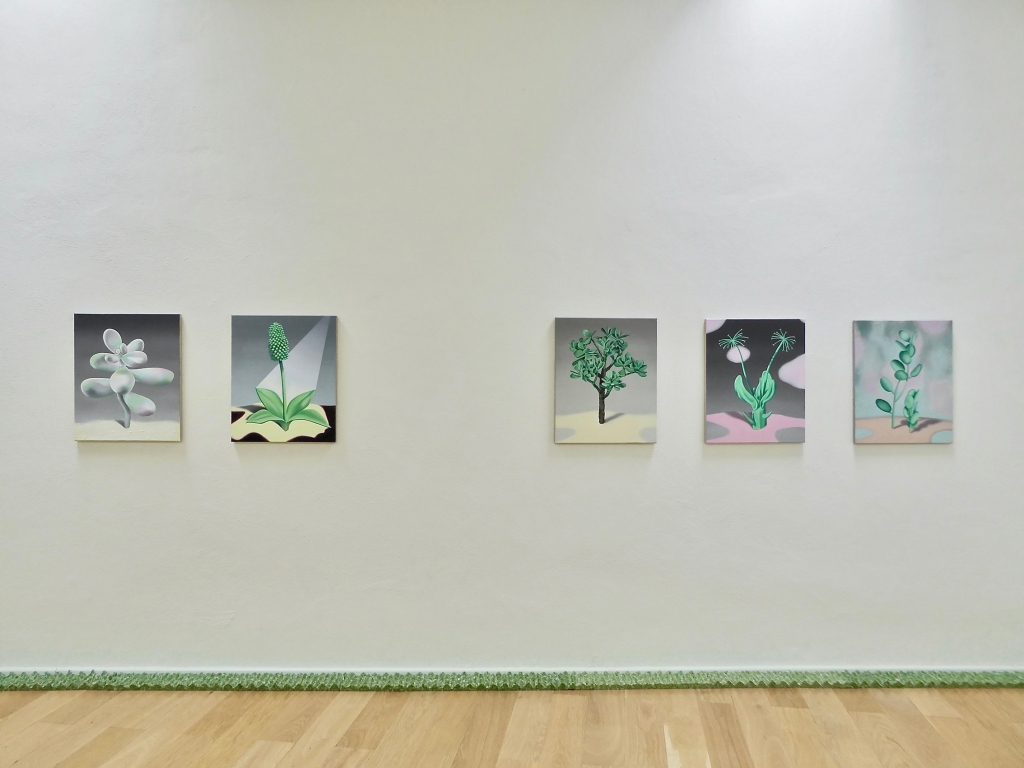 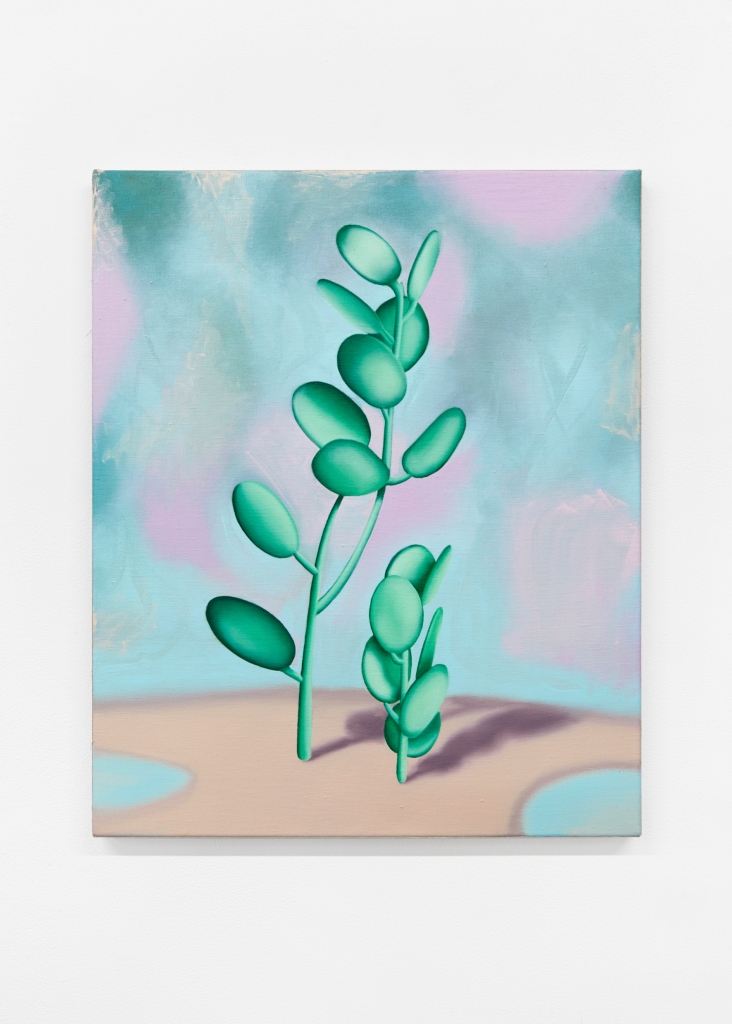 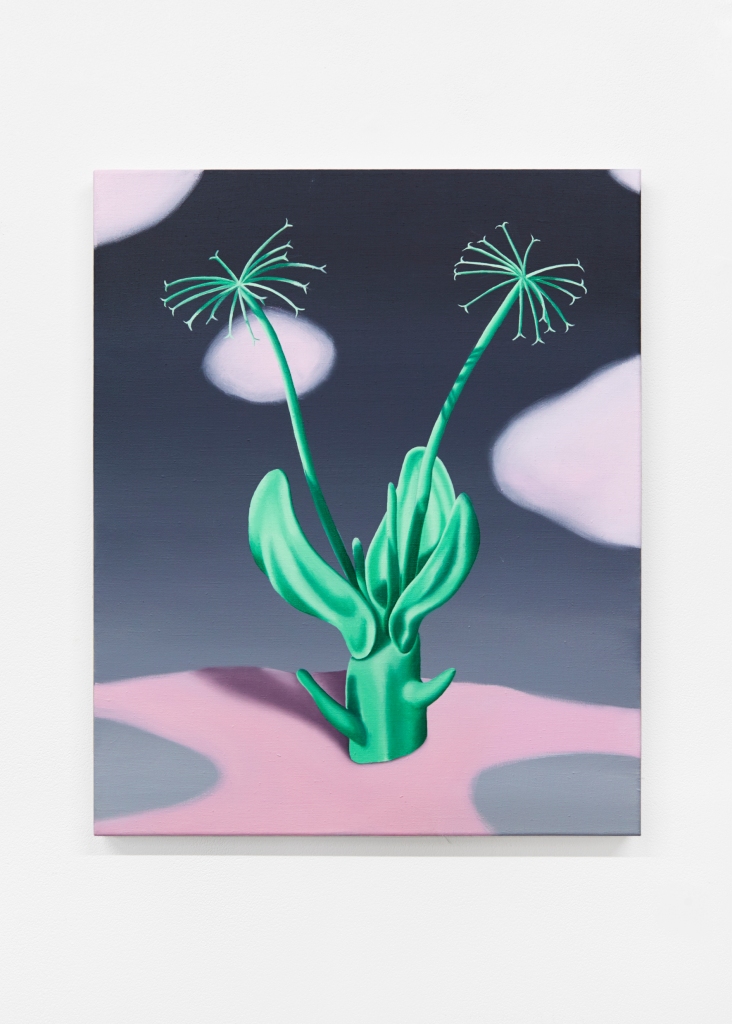 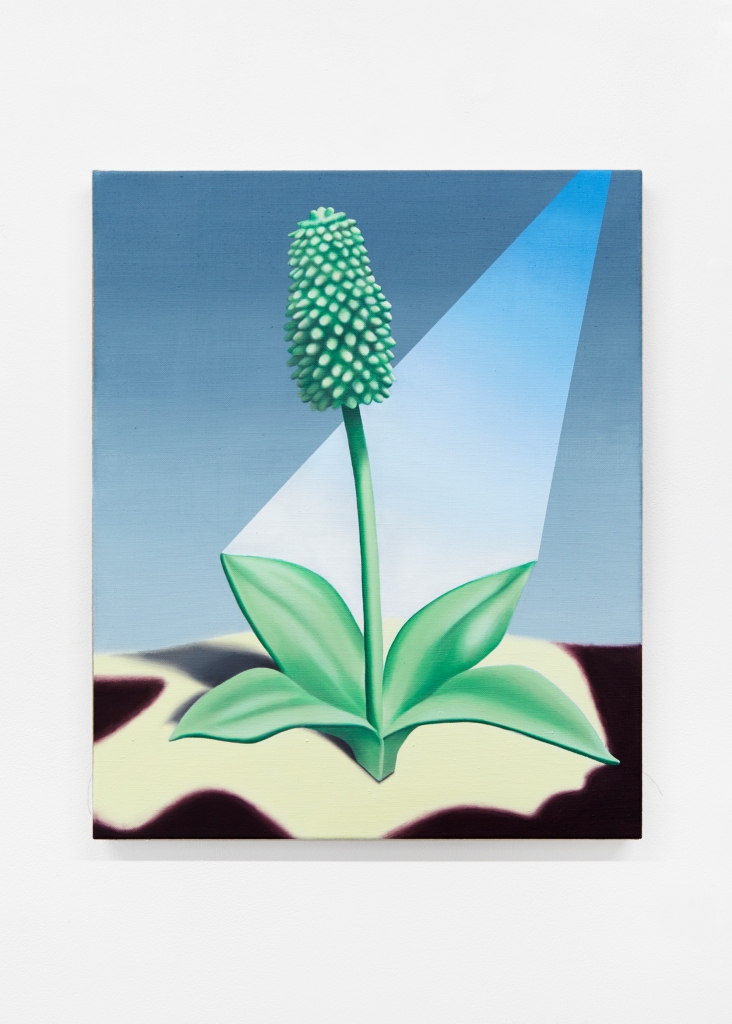 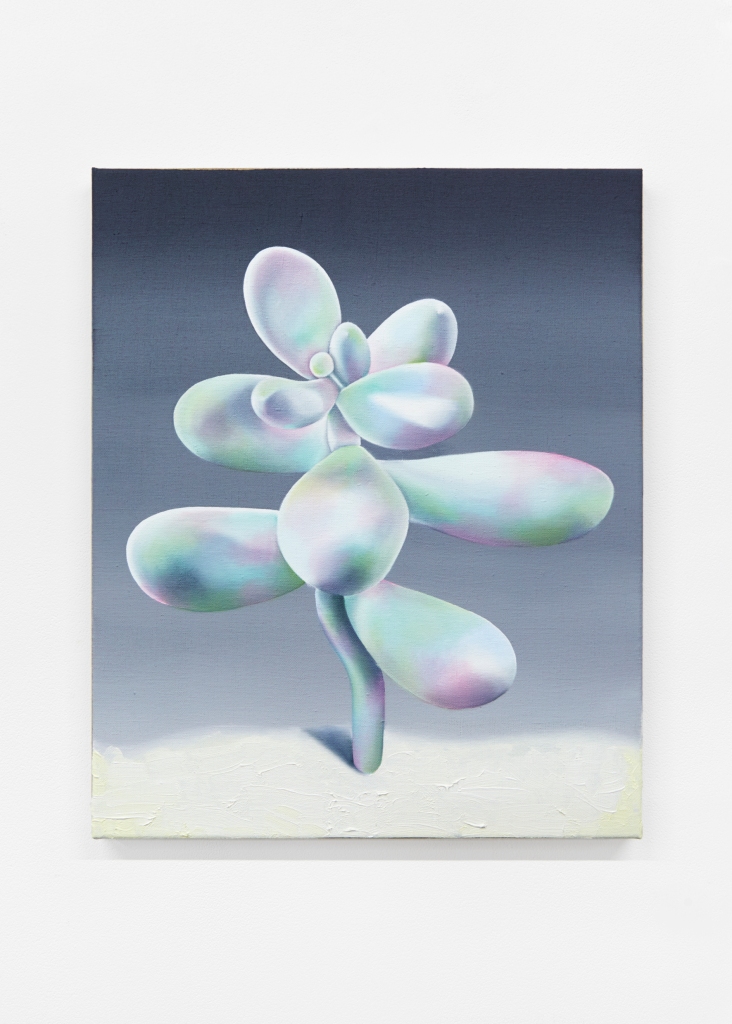 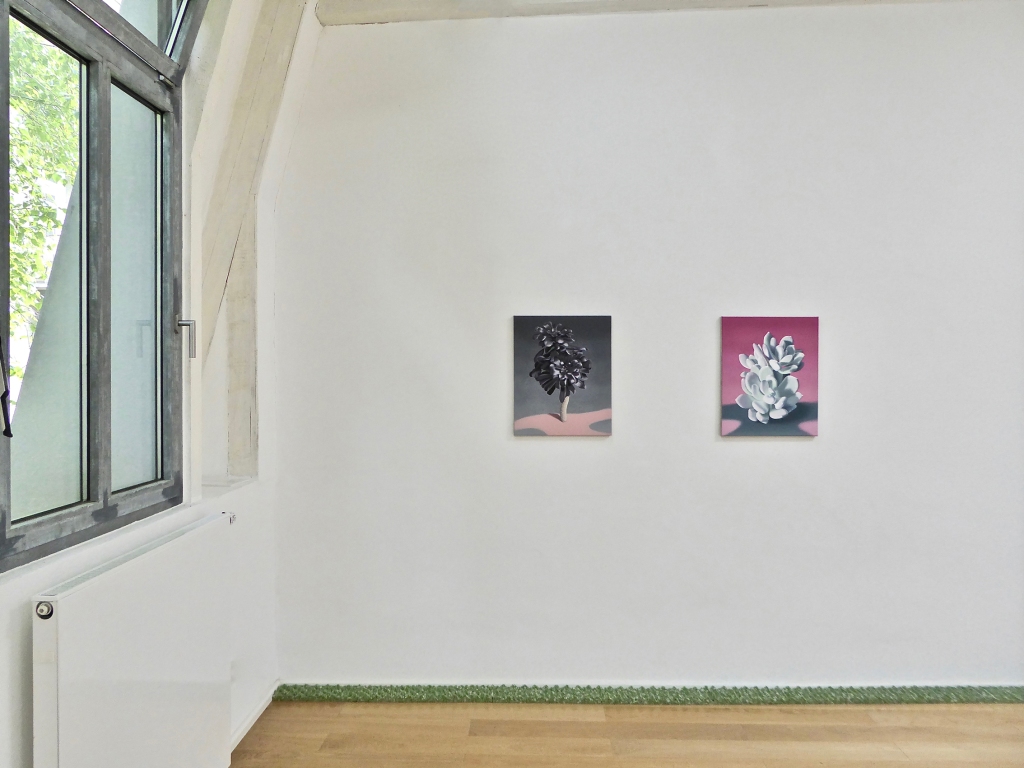 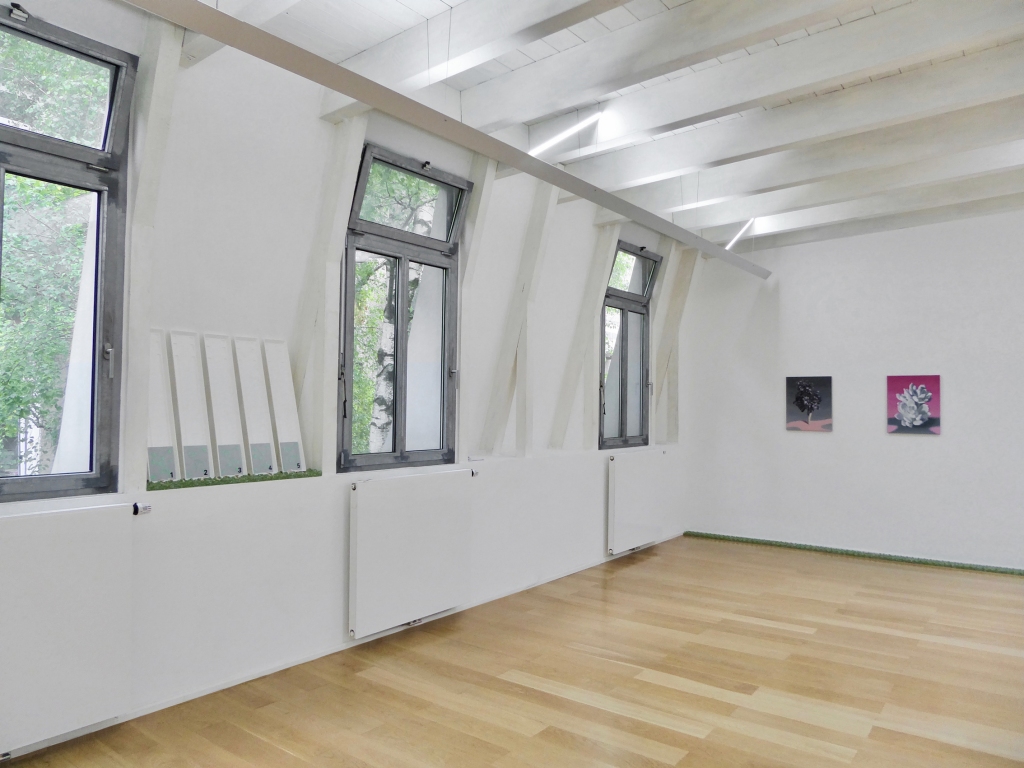 Compared with the large scale installations of paintings, objects and video she has shown previously, the show Jane Hayes-Greenwood presents at GiG seems, at first glance, quite straightforward. It consists of thirteen small oil paintings, all on identically sized linen canvases, each depicting one flower or plant. Some of these plants – like for instance, One O’Clock Gun – look vaguely familiar, something you might come across in a garden or meadow, others are startlingly strange, unnatural composites of tubular forms, bulbs, prickles and flesh.  Although many of the plants are green, the colours are unlike those found in nature, a mixture of viridian, mint, pale blue, grey and black. The plants are rooted in the soil, but this is pale yellow or pink – they are clearly defined, casting strong theatrical shadows, yet equally clearly, they are not from this world. They are all slightly larger than life.

Speaking to Jane, we learn that the work stems from her earlier research into the origin of the ❤️ symbol. It is thought that this shape is based on the seeds of a mythical plant, the Silphium, known in Roman times for its contraceptive and aphrodisiacal properties.  A possible recreation of how Silphium might have looked appears in Apollo’s Gift and Apollo’s Gift II. The other plants of the collection have been similarly selected for their histories, their medicinal properties or even, as with One O’Clock Gun, for their unusual name.  Together they form a ‘Witch’s Garden,’ and it seems very deliberate to be showing them in Bavaria, a state infamous for one of the largest witch trials of the 17th century.

But just as a fast motion film of a plant germinating and growing does not bring us any closer to the actual seedling, knowing more about Jane’s research practice is not what brings us close to the work.  As Heidegger argues in his short essay ‘The Thing,’ the abolition of distance brings no nearness, indeed often when distance is abolished, the nearness of the thing remains absent. Nearness cannot be encountered directly, instead, it can only be reached by attending to what is near.  And what is near according to Heidegger, are things, standing on their own, self-supporting and independent. Things are not objects, neither re-presented in perception, thought through their making process nor through the function they fulfil. They cannot be defined for us, precisely, by scientific method.  We have to learn the activities of things through what they do, because things are foremost an activity that involves other things and non-things – the world.

Since I have known Jane, she has always been interested in things, whether these are the mysterious artefacts of her earlier drawings, the fetishistic partial objects of her paintings, or in this case, the plant forms contained by her canvases. Whether or not these plants are supposed to be life-like or make-believe, they gather together tales of the divine and the problems of being human, what relates to the infinite, and what is defined as perishable. Quite literally they stem forth to join earth and sky. They encourage us not to think the earth and sky separately in order to define and understand them but together, at once, intertwined. 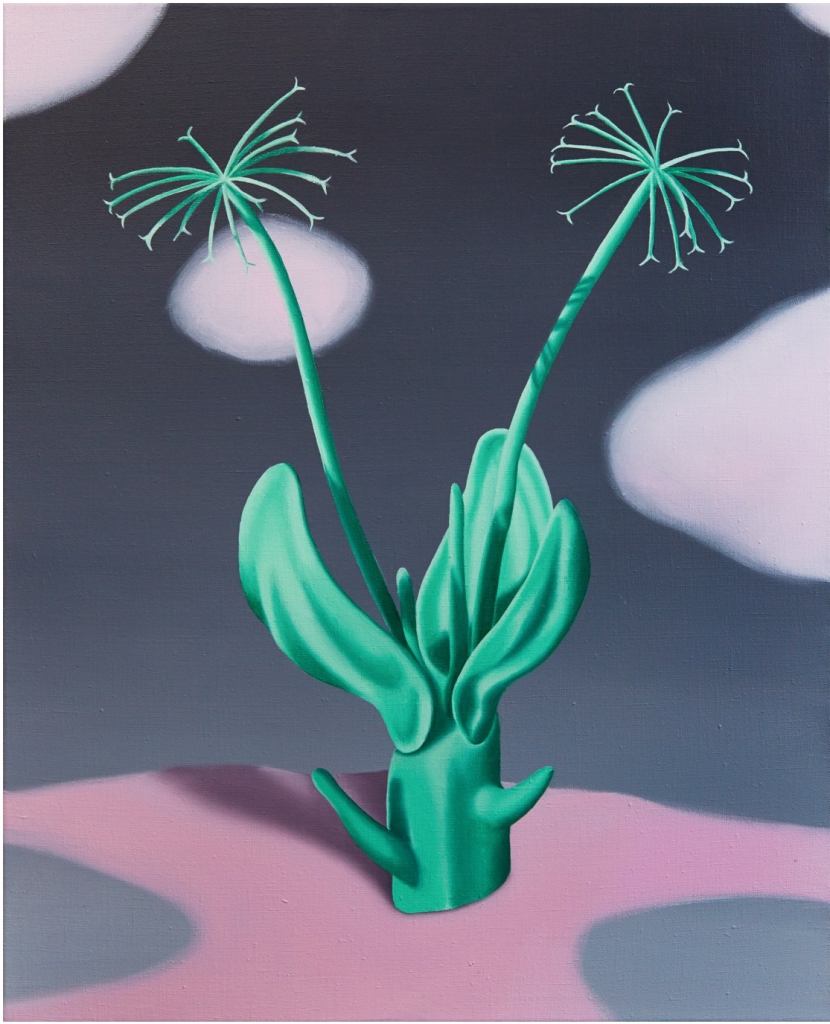 GiG Munich is excited to present The Witch’s Garden, the first international solo exhibition by London-based, British artist Jane Hayes Greenwood. The show focuses on the artist’s latest series of work, newly made paintings of dreamlike plants and the mythical gardens where they might grow. Exploring desire, control and magical thinking, the work makes use of an idiosyncratic symbolism, referencing varied sources such as illuminated manuscripts, botanical illustration, anatomical diagrams and herbal fertility guides.

In The Witch’s Garden the painted plants act as potential ingredients for love potions or spells, their depicted herbs and flowers thought to have special power and potency.  Drawing on apocryphal histories, the painting Apollo’s Gift I is based on an extinct plant known as Silphium, reportedly used as a contraceptive and aphrodisiac in the 700 BC. Described as having a heart-shaped seed, one theory suggests this might be where the heart shape symbol

originated from.  The Witch’s Garden explores our relationship to the natural world, our bodies and their life cycles, and considers fear, power and ritual behaviour.

Jane Hayes Greenwood completed an MA in Fine Art at the City & Guilds of London Art School with distinction in 2015. Soon afterwards she was shortlisted for the Catlin Art Prize, 2016 (London) and presented a large-scale solo exhibition, Lead Me Not Into Temptation, 2017 at Block 336 (London). She was recently selected for the  Anomie Review of Contemporary British Painting, 2018, as one of the 40 artists whose practices have been shaping and defining Britain’s contribution to current painting on the national and international stage. She is also the co-founder and Director of Block 336; an artist-run project space, studio provider and UK registered charity located in Brixton, London that has hosted over 30 exhibitions. She teaches within the BA Fine Art department at City & Guilds of London Art School.